After UB Refund, Poker Player Can Finally Lose Everything One Last Time

San Francisco, CA – On Monday April 10, the poker world rejoiced after finding out that thousands would soon receive their account balances from UltimateBet and Absolute Poker. But one such player, Andrew Stevenson, may be celebrating a little more than most since this means he can finally go broke one last time.

“I just never dreamed I’d have the opportunity to lose everything and disappoint everyone in my life again,” the 32-year-old Stevenson told reporters whilst fighting back tears following Monday’s announcement.

“I thought every dime I had was gone forever after Black Friday. When I got my PokerStars money back, I was so excited that I naturally played in a couple of $10K events to celebrate. I went bust in those and then dusted off the rest of that money in the pit.”

The reimbursement announcement came almost six years to the day after Black Friday and three years after players discovered they would also be reimbursed for money once-thought lost on Full Tilt Poker.

Stevenson was similarly shocked years earlier when he got his FTP refund. After receiving his check from the Garden City Group for over $24,000, he immediately quit his job, flew to Vegas, partied hard for exactly one night, and then lost everything betting sports.

“Yeah, those were wild times,” Stevenson noted. “I can’t wait to not learn anything from my mistakes.”

Stevenson has gone bust many times in his life. After being up hundreds of thousands online, Stevenson lost all his money to bad investments, backing losing players, and table games.

“But all of that is about to not change,” he noted.

“This is sort of like the degenerate triple crown. First I blow my Stars roll. Then Full Tilt. Now UB!? Wow. It’s always been a dream of mine to go broke after being reimbursed by three different sites three different years. Now I can. How many people can say that?”

The shadiest poker network ever?

Ulimate Bet and Absolute Poker were sister sites under the CEREUS Network which for some reason we all still played on even though none of us ever trusted them for a second and their roster of pros was populated by some super random skeezy low-lives.

After talking to reporters, Stevenson mentioned that he was a little disappointed that he likely won’t ever be able to blow his entire bankroll in one day again. That is until he suddenly remembered….

Good luck, Andrew. We’re all rooting for you. 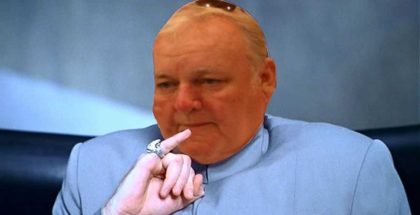